The Path to Multi-Currency

THE US DOLLAR HAS LONG DOMINATED GLOBAL CROSS-BORDER TRADE AND CURRENTLY ACCOUNTS FOR TWO-THIRDS OF INTERNATIONAL DEBT GIVING THE US SIGNIFICANT INFLUENCE OVER THE ECONOMIC FATE OF OTHER COUNTRIES.

The SWIFT system – an international payment system that enables global financial institutions to securely, and reliably, send and receive information about financial transactions. At inception, in 1973, it was supported by 239 banks in fifteen countries. That has since grown to more than 11,000 financial institutions across more than two hundred countries today. And, while this is an “international” system, the US has a tight grip on the SWIFT system thanks to its reserve currency status.

The US dollar has long dominated global cross-border trade and currently accounts for two-thirds of international debt. When global trade, savings, borrowing, and reserves are largely in one currency, these strengths are mutually reinforcing. No other capital market comes close to America’s for depth and liquidity, a key factor when choosing a currency for commerce. This type of centralized power gives the US significant influence over the economic fate of other countries.

In 2014, Russia initially developed an alternate financial message system when it was facing threats from Washington of removal from the SWIFT network. Then in 2018, America shut down SWIFT to all countries doing business with Iran. In 2019, it went so far as to target an individual company; Huawei.

With its control over the SWIFT system, the US is extending the reach of American law by weaponizing the US dollar. Alongside sanctions and tariffs, the payment system is being used to punish both countries and businesses. By blocking access to this payment infrastructure, the US can immediately take away one's ability to trade and do business internationally. As of January 2020, the US now has over 30 active financial and trade sanctions programs in effect. This lack of control has forced countries to seek out SWIFT alternatives.

“The world’s reliance on the US dollar won’t hold.”

Furthermore, members of the BRICS trade bloc – Russia, India, and China – have decided to connect their financial messaging systems to bypass the SWIFT international money transfer network. This would threaten the central roles of the US financial system globally, reducing demand for the US dollar and the effectiveness of sanctions going forward.

The Bank of England governor, Mark Carney, said “the world’s reliance on the US dollar won’t hold” floating the idea of a blockchain network of central bank digital currencies for a new international monetary and financial system.

Central banks have been stockpiling gold to diversify reserves away from the US dollar – further illustrating a lack of trust in the US dollar. 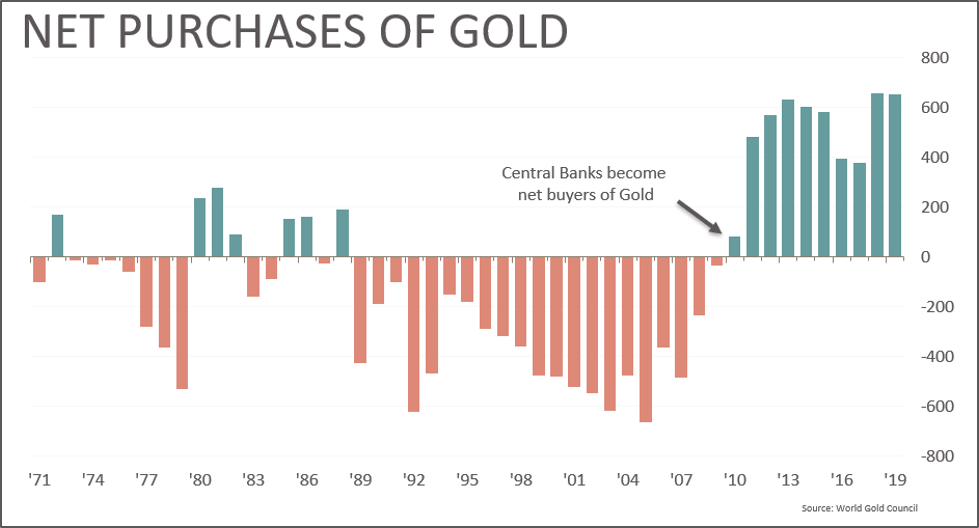 We are entering a new era of international monetary experimentation, one that includes the fading of US dollar dependence. The roles and responsibilities of a reserve currency are not synonymous “America First”. Trust in the US is collapsing, and this is just the beginning. The path to a multi-currency world is evolving and being forged by not one, but several countries and regions around the world.

We have reduced our exposure to the US dollar, diversified into multiple currencies and believe all portfolios should have some allocation to gold.