Should We Short Tesla?

The number one question asked during our inaugural Ask Us Anything webinar was… “Should we short Tesla?”

Should We SHort TEsla?

Let us back up a moment and put this into context.

As a matter of fact, Tesla’s market cap is larger than the top 9 car companies in the world combined. 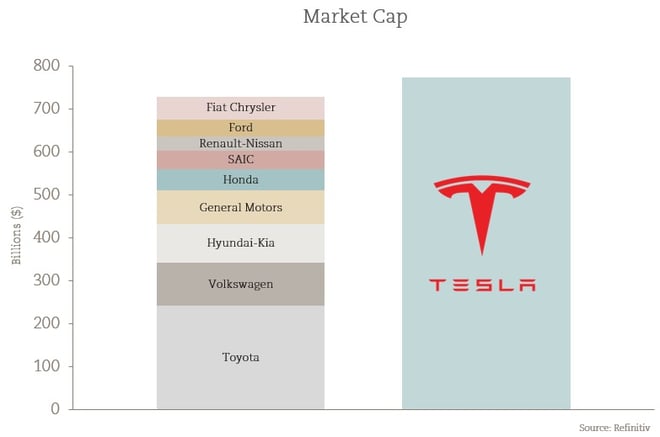 Because the S&P 500 is market-value-weighted, Tesla became one of the most valuable companies within the index, alongside Apple, Microsoft, Amazon, Facebook, and Google.

Here's the kicker – while the value of Tesla dwarfs all of its competitors, its global auto market share is minuscule.

The influence that these select few companies hold over the index's total performance continues to grow – increasing concentration risk! 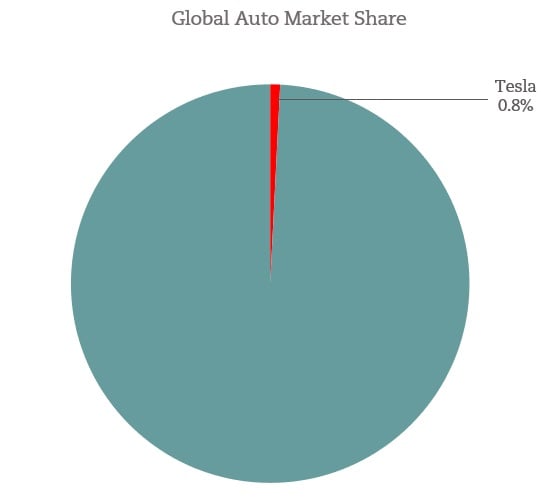 Concentration risk is not new and is a typical late-cycle indicator. Just think back to the late 1990s. Technology’s share of the S&P 500 climbed from 8.5 percent in January 1995 to a peak of 33.1 percent in February 2000. The same thing happened during the housing boom; we saw a mortgage debt surge as money rushed into housing. Today, the six companies mentioned above make up +24% of the S&P 500 and a whopping +50% of the Nasdaq 100!

So, should we short Tesla?

In its simplest form, “shorting” a company means that a trader borrows a stock and sells it, hoping it will fall in price. Since the short-seller must eventually return the borrowed stock, she will have to repurchase the stock. If the price declines, the short-seller turns a profit (sells high and buys back lower). However, should the stock price rise, the short-seller is open to an unlimited loss, as well as potential forced liquidation (margin calls).

A recent example of the volatility of short selling was the GameStop fiasco. Short sellers got burned as the stock climbed exponentially from $6 to over $480 in very short order – thanks, Reddit!

Ironically enough, the two top-performing stocks in the S&P 500 for 2020 were Tesla and Etsy (both added to the index within the final four months of the year). To make room for the new “high fliers,” the companies removed came primarily from the down-and-out Energy Sector and the boring, unsexy and underperforming Real Estate Sector. You can be sure that index inclusion fueled a buying spree from index fund managers who were forced into a “buy high, sell low” situation.

Rather than hyper-focusing on Tesla and its wild valuation, we spend our time exploring off-the-radar and often overlooked companies. We continue to pursue pick-and-shovel opportunities underpinning the vision of our longer-term themes. At this time in the cycle, selectivity is of utmost importance. This is not the time to load-up on passive indices, nor to speculate on high-fliers, either way.

As John Maynard Keynes said, “markets can remain irrational longer than you can remain solvent.”

It’s What You Pay!