Modern Monetary Theory (MMT) has received increased attention due to both the upcoming US Presidential Election and COVID-19’s economic impact. But what is MMT? Is MMT a new concept? And what are its implications?

The central idea of MMT is that a government with a fiat currency system can, and should, print money to finance itself.

MMT argues government spending funded by the printing press can grow the economy to its full capacity, enrich the private sector, eliminate unemployment, and finance significant programs such as universal healthcare, guaranteed income, free secondary education, and green energy. Thus, making balanced budgets and debt ceilings a thing of the past. 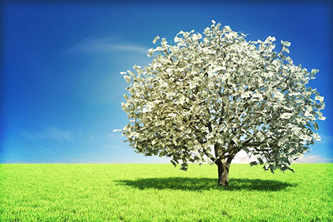 Idiom: money doesn’t grow on trees. Said to warn someone to be careful how much money they spend, because there is only a limited amount.

Tell that to the government.

Is MMT a new concept?

The idea of ‘creating paper money’ was written about in the early 1900s, and there are numerous times in history that countries have undertaken MMT.

Following Germanys World War 1 defeat, the government printed money to pay its bills. The war had destroyed its productivity, but Allies were insisting it pay reparations far above the ability of its shattered economy. When a lack of productive supply met an excess demand from cash, hyperinflation was the result - people needed wheelbarrows of money just to buy bread.

In the case of Venezuela in 2018, the printing presses spurred currency devaluation and hyperinflation. Prices soared, including stock prices on the Caracas Stock Exchange, but the value of the currency cratered. The Venezuelan Bolívar became a near irrelevant form of legal tender. Considering the positive returns in the stock market, domestic investors may have done alright; however, foreign investors' returns were wiped out due to the devaluation of the currency.

MMT holds that a government that borrows in its currency is never in a position where it cannot finance something, whether that is the employment of all idle labour at a guaranteed minimum wage or, as we see now, a response to the COVID-19 virus. Where countries get into sovereign debt trouble is when they do not control their currency, whether that is Indonesia borrowing US dollars in the 1990s or Greece borrowing euros in the Great Financial Crisis (GFC). MMT argues that it is the lack of goods, labour, or capacity that triggers inflation, not printing presses.

Implications of MMT in the US

The reality is that the US has been accepting growing deficits for years, even before the COVID crisis. However, this pandemic has moved MMT from the fringes to the actual monetary policy in the US. Post-pandemic national debt will approach $30 trillion.

Will future generations be able to support this debt, or will printing presses? In the case of printing presses, governments need never default or worry since they can always print more to repay their debt.

“One thing we know for sure is that over the long-term, printing presses will not make the US dollar go through the roof.”

Countries are not economic islands. Unlimited money printing and increased deficit spending strip away real value and purchasing power of that currency. The simple law of supply and demand argues that it is difficult to value something with infinite supply.

Questions we are still pondering:

We have already seen governments replace some of their US dollar exposure with Gold. We feel that Gold, along with some form of Treasury Inflation Protected Securities, should be part of all portfolios. Also, we have spread our currency risk throughout the world, even investing in Asian Fixed Income in local currencies.

Balancing risk in this environment, including currencies, is of utmost importance.