The Debasing of the U.S. Dollar

GOLD SHINES BUT THE GREENBACK IS LOSING LUSTRE

The price of gold has reached new six-year highs against all the major currencies, including the U.S. dollar.

Some of gold’s rise is attributable to recent economic uncertainties. But looking back, multi-year trends between gold and the U.S. dollar fit the theme of a changing financial dynamic where the greenback risks losing its status as the world’s reserve currency.

With quantitative easing ended, and money supply reduced, we expected to see more strength in the U.S. dollar over the last few years. But something has changed. Since 1971, foreign exchange reserves held at the Fed have grown, broken only by recessions or crises.  This longstanding trend has changed since 2011 as illustrated in Figure 1. 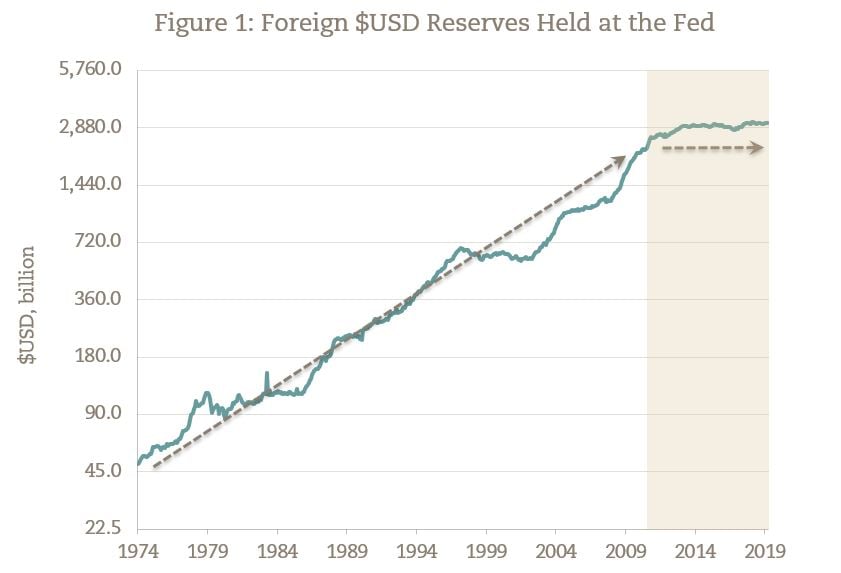 It is plausible that foreign central banks no longer see holding U.S. dollars to be as practical as it once was. Two possible reasons for this are the growth of political and economic isolationism in the U.S. and the weaponization of U.S. currency.

Isolation has been a growing theme over the past several U.S. election cycles.  In 2011, despite Chinese objections, then-Fed Chairman, Ben Bernanke, implemented second-round quantitative easing (QE2) in an effort to stimulate the U.S. economy. The move devalued the U.S. dollar and depreciated the value of U.S. Treasuries held by China, the U.S.’s largest debtholder. The symbiotic relationship between the two countries allowed the U.S. to issue relatively cheap debt to fund their deficits, enabling the Chinese to  build their Treasury reserves to buy commodities. Suddenly, the purchase power of those Treasuries was in decline. QE2 happened and the world’s nations would now have to deal with the negative consequences. The U.S. was becoming less reliable.

In recent years, the U.S. has weaponized the dollar, using it as a coercive, diplomatic tool to shape the world’s capital markets. In 2014, the U.S. Justice Department slapped BNP Paribas with a $140 million fine, forcing BNP to forfeit $8.84 billion in assets for business conducted in Sudan.  At the time, Paris-based BNP believed it was free to operate in Sudan since the country was not under French sanctions. These transactions were denominated in U.S. dollars, as most international transactions are.  The use of U.S. dollars allowed the U.S. Justice Department to conclude that BNP had violated U.S. sanctions against Sudan and, subsequently, imposed punitive action. The U.S. had exerted extra-territoriality over an international deal—the first of many examples.  To bypass the scrutiny of U.S. authorities, other countries and business entities have since begun to explore alternatives to the U.S. dollar.

The international desire to find alternatives to U.S. dollars has taken shape.  Former French Finance Minister Valéry Giscard d’Estaing (1962 to 1966) coined the term “exorbitant privilege” to describe the benefits the U.S. enjoyed as a result of its dollar serving as the world’s reserve currency. Demand for dollars would remain high—providing the U.S. with access to cheap debt through Treasury sales. Should the use of the U.S. dollar decline, the impact could be a loss of this ‘privilege.’ Alternatives will have to fill the gap. Gold, Renminbi, Euro, and cryptocurrencies/blockchain are potential candidates.

We could be at the beginning of a multi-currency world with significant implications, both positive and negative. It is important to understand these alternatives, determine their viability, and understand how to invest in them as the opportunities emerge.