Is Bitcoin An ESG Problem?

The electricity consumed by bitcoin annually is equivalent to the energy needed to provide over 13% of Canada's annual energy needs.

To "mine" Bitcoin, computers and servers are connected to the cryptocurrency network. They then verify transactions. This process involves solving puzzles, which, while not integral to verifying the currency's movements, provide a hurdle to ensure no-one fraudulently edits the global record of all transactions.

This is an intricate power-hungry process!

As a reward, miners occasionally receive small amounts of Bitcoin in what is often likened to a lottery.

The appreciation in Bitcoin incentivizes miners to increase their mining operations as the payday can be even greater. Increased mining generates increased energy consumption – rinse, repeat.

The entire Bitcoin network now consumes more energy than several countries, according to The Cambridge Centre for Alternative Finance.

The electricity consumed by bitcoin annually is equivalent to the energy needed to provide over 13% of Canada's annual energy needs. If it were a country, it would rank as shown below. 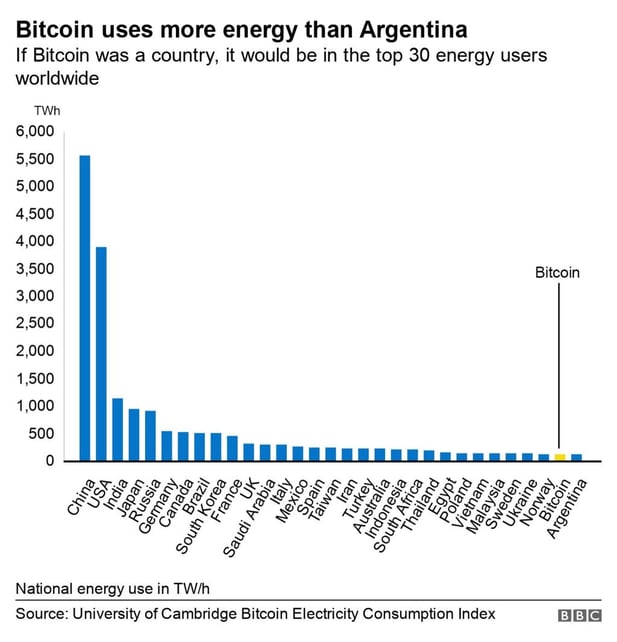 More than 78% of Bitcoin's processing power currently comes from only three countries – China, Russia, and Kazakhstan.

All of which have a high CO2 emission intensity, with most of their electricity generated from fossil fuels and, in particular, coal.

China has pledged to halt the rise in its carbon emission before 2023 and has committed to achieving carbon neutrality in 2060. China's top energy-consuming province Inner Mongolia plans to suspend all new and existing Bitcoin mining projects before the end of April 2021 to help it meet its energy-saving targets.

While renewables are an intermittent energy source that continues to improve, they are not currently a 100% continuous power supply. Bitcoin miners have a constant energy requirement and cannot power down mid-transaction. They require a steadier source of energy, such as what fossil fuels have historically provided.

Esg vs. crypto hype - what image is most important?

Does electric-car firm Tesla's decision to invest in Bitcoin undermine its environmental image?

Tesla received $1.5 billion in environmental subsidies in 2020. The company then spent $1.5 billion on Bitcoin. For a company looking to create a greener future, it just increased its global footprint by a large margin.

Perhaps a carbon tax on cryptocurrencies or increased regulation could balance the environmental impact of these transactions.

The Bitcoin network currently processes only a tiny fraction of financial transactions per year. Still, it has an energy footprint that is multiple times larger than that of banks and other financials.

When comparing a standard financial transaction of both Visa and Bitcoin based on Gigajoules of energy, a single Bitcoin transaction uses the same amount of energy as 100,000 Visa transactions. The difference becomes even greater if you take into consideration the energy source.

One could argue that the greater energy consumption is simply the price of a private, secure transaction that does not require a third party, such as a traditional bank or payment system like SWIFT. Or should a carbon tax or increased regulations help us maintain society's ESG agenda?