Bitcoin: From Notoriety to Acceptance

When something becomes digitized and easy to access, share, and distribute, it can spread at the speed of the Internet.

The year was 2009. The event was OUTLOOK. Our theme was Creative Destruction. We were moving from a 3G to a 4G world, and significant dislocation was about to occur. Instagram would eventually replace Kodak, your CD collection (compact disc for anyone under 25) replaced by Spotify, and bars replaced by Tinder.

The same year, the first Bitcoin proof of concept was published. Over the ensuing decade, Bitcoin has enjoyed certain notoriety, but investors have been apprehensive. That has changed. We have received many questions regarding the validity, security, safety and potential opportunity regarding Bitcoin and felt it was time to have that conversation.

In a recent article, 13D Global Strategy & Research delivered a compelling bullish case for Bitcoin based on four principles, with which we tend to agree. We paraphrase:

Bitcoin is a peer-to-peer payment network that has no government or central bank authority. Currently, Bitcoin is considered a ‘store of value’ rather than a method of payment. The ‘store of value’ property arises from the fact that Bitcoin has an algorithmically finite supply built into its source code. Similar to a hard asset such as gold, Bitcoin’s supply cannot be inflated at free will – there will never be more than 21 million coins in circulation. Its scarcity can significantly impact its relative value.

WITHOUT CENTRAL AUTHORITY, WHO SUPPORTS THE SYSTEM?

Created in the wake of the global financial crisis, Bitcoin runs on the Bitcoin blockchain, a publicly distributed ledger that records every Bitcoin transaction ever processed. The blockchain was designed to be irreversible, meaning that Bitcoin transactions cannot be manipulated or altered. The decentralized and immutable features should improve data integrity and overall transparency.

Since its launch in 2009, investing in Bitcoin has primarily been viewed as a speculative practice due to extreme bouts of price volatility. Greater user adoption will provide stability. Further, rising institutional interest will help validate Bitcoin as a ‘store of value.’

WHY SHOULD I TRUST IT?

Since Central Banks control fiat currencies, these institutions can manipulate their respective currencies' supply and have an unlimited ability to print money. Expanding the money supply must be met with a comparable increase in demand, or the currency will face an erosion of value. As supply outstrips demand, prices fall, and vice versa. For the past ten years, we have witnessed a declining purchasing power of money due to a concerted and relentless effort by Central Banks to increase the global money supply.

Unlike fiat currencies, Bitcoin is borderless and based on mathematics. Absent of human intervention (i.e. Central Bankers), Bitcoin's supply increases are fixed via computational mining, which entails solving complex mathematical problems. With each equation solved, 'miners' are rewarded with new Bitcoin, which increases supply to the digital ecosystem. Approximately every four years, the new Bitcoin creation rate is ‘halved’ until supply reaches the fixed 21 million total. There are roughly 18.5 million Bitcoins (~88% of total supply) in circulation today to place this in perspective.

HOW IS BITCOIN VALUED?

The value of Bitcoin is derived primarily from its supply/demand economics and network effect. Bitcoin's fixed-limit protocol provides scarcity, while its first-mover advantage creates a positive feedback loop.
One common characteristic stands out with the adoption of all technology; the S-curve. In layman's terms, getting to a 10% adoption rate and a 90% adoption rate takes the same amount of time - a shift from slow growth to exponential growth. 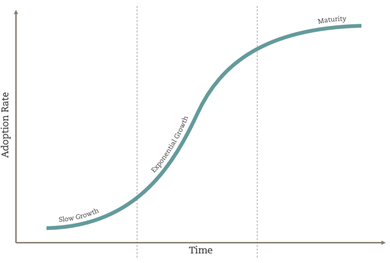 Recently, notable financial service providers Square and PayPal have made waves in the cryptocurrency space. Square launched its support for Bitcoin on its Cash App in 2018 and reported that it has now invested 1% of its total asset base ($50M) in Bitcoin. Paypal, which facilitates billions of dollars worth of transactions each year among its ~346M active customer accounts, announced its plans to allow the buying, holding, and selling of Bitcoin and other digital assets on its platform. These meaningful announcements should help drive greater adoption and relevance.

Balancing risk comes in many forms. Some public, some private. Some equity, some fixed income. Some fiat, some digital.

Today, Bitcoin commands almost two-thirds of the entire cryptocurrency market share. As supply decreases and demand rises exponentially, this could provide a powerful catalyst for Bitcoin's price. There is also the added benefit of little correlation to traditional asset classes. Lastly, its best performance has historically been during the first 12 months following a 'halving,' which most recently occurred in mid-2020.

When something becomes digitized and easy to access, share, and distribute, it can spread at the speed of the Internet.