Anatomy of a Bear Market

WHY IS IT ALWAYS AFTER THE MARKET INCREASES THAT THE HEADLINES SCREAM BUY?

After reading about the shortest bear market in history, one might think, should I buy the rally?

April marked the best month for the S&P 500 in 45 years. It is now trading at a higher multiple than pre-COVID-19 and the top 5 companies account for more than 22% of the market value of the entire index – wow!

So, why is it always after the market increases that the headlines scream BUY?

We argue that there is a lot more to a bear market than a one-month pullback.

In its most basic form, a bear market can be described as a period when a market falls at least 20% from its previous high. Beginning in late February, propelled by the COVID-19 pandemic fears and an oil price war, global markets have fallen sharply, eclipsing that 20% decline marker. However, as we have previously mentioned, the combination of softening global economic data, stagnant corporate profits, and extreme valuations led us to believe that a reversion to the mean was only a matter of time.

The 3 Stages of a Bear Market

Stage 2 An oversold rally helps recoup a part of the decline. As the rally intensifies, investors are drawn back in as the “fear of missing out” (FOMO) leads to a belief that the worst is over.

Stage 3 As the market decline resumes, fundamentals continue to deteriorate, and valuations return to more normalized levels. Investors lose hope and capitulate. Bear markets don't typically bottom until all optimism has been wiped out.

Understanding the market environment that you are in is imperative. Currently, there are many anomalies. Just look of the negative price of oil last month. Or, the fact that the US has contributed a stimulus package larger than all other countries combined… by 5 TIMES! Many are quoting COVID-19 as this year’s Black Swan. That’s not the Black Swan. The world shutting down is the Black Swan. Now starts the tug-of-war. Can the unparalleled amount of stimulus ignite an idle world?

Only time will tell.

Since 1926, the S&P 500 has experienced 16 bear markets, historically emerging once every 5-6 years. While the length and severity of each drop vary, it is important to remember that bear markets are a natural part of investing and market cycles. Market bottoms are a process and while many are focused on "timing", the actual bottom can only be identified in hindsight,after the fact. Instead of spending valuable time and energy trying to predict the low, we remain focused on thematic assets with strong balance sheets. Private alternatives and covered call hedging strategies also help provide a layer of income protection.

This environment calls for nimble rotation. 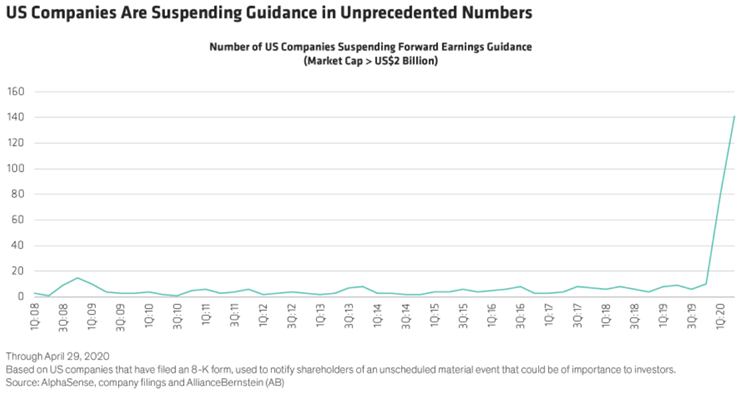 “The bottom is the day before the recovery begins. Thus, it’s absolutely impossible to know when the bottom has been reached… ever. We buy when we can access value cheap.”

We find the divergence between top-down forecasters and the bottom-up components of the index quite perplexing. The top-down are calling for the market to race back to new highs, while the corporations are, for the most part, giving no guidance.

How can one forecast with no numbers?