OVER THE PAST DECADE, S&P 500 COMPANIES HAVE SPENT A STAGGERING $5 TRILLION REPURCHASING THEIR STOCK.

Let us dig a little deeper.

Over the past decade, S&P 500 companies have spent a staggering $5 trillion repurchasing their stock. This buyback boom was buoyed by low rates and then again by corporate tax cuts. 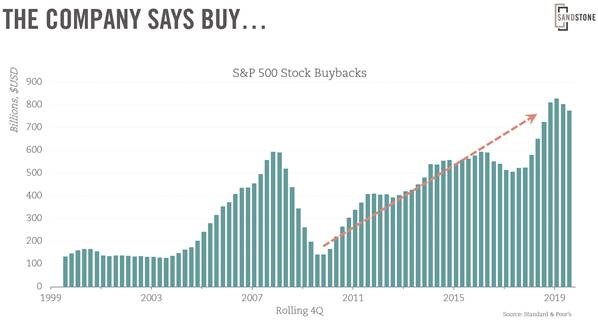 In January 2020, insiders sold approximately $36 of stock for every $1 they bought; this compares to a historical average of 8 sales-to-1 buy. Insider selling is always a part of the market, but it is an anomaly at such an excessive amount.

Interestingly, buybacks and insider selling accelerated together, while capital expenditures and revenue growth were flatlining.

The decision to leverage up balance sheets to repurchase stock has more to do with short-term stock appreciation than long-term business health. Buybacks reduce the number of shares outstanding, which camouflages declining revenue (or revenue growth) on any per share valuation metric – a type of financial engineering.

Borrowing for capital spending, which creates future revenue growth, does not have immediate results on earnings as do buybacks. Approximately 1,000 points of the S&P 500’s index are thought to be the result of stock buybacks.

The answer lies in a little-noticed line on their cash flow statements labelled, stock-based compensation.

Let us take a look at some large, established, blue-chip stocks – McDonald's, Caterpillar, Boeing and 3M. On average, these companies each spent $200 million per year on the issuance of options to executives. Those same individuals decided it was a good idea to leverage the balance sheet to buy back stock. They also decided it was not a good time to be a holder of those shares, collectively selling over half a billion dollars worth.

Is there a correlation between insider selling and buyback announcements?

Yes! A study by the office of SEC Commissioner Robert Jackson found that the percentage of insiders selling stock more than doubled immediately after buyback announcements.

“Right after the company tells the market that the stock is cheap, executives overwhelmingly decide it's time to sell… They're buying back from the front door, and shovelling shares out the back door… ”

Buybacks amidst the market downturn

Now that the markets have fallen over 30% and companies are trading at cheap valuations, buybacks are drying up!

AT&T recently announced they are cancelling their 2Q20 $4 billion accelerated share repurchase agreement after their stock price dropped 34%. Their reasoning "to maintain flexibility and focus on continued investment in serving our customers, taking care of our employees and enhancing our network, including nationwide 5G". Now that AT&T's shares are drastically cheaper, they no longer are in favour of repurchases but instead view this as a time to allocate capital into future growth prospects such as 5G.

This capital allocation strategy is almost comical – buyback expensive stock and cancel buybacks when they are good value and could help support the stock.

US politics – the winds are changing

Defenders of buybacks received a blow last week when President Trump said he was unhappy with companies that used cash from his 2017 tax cut to repurchase shares rather than build domestic infrastructure. Stating he "would support a prohibition on buybacks for companies that received government aid."

The five biggest American airlines spent 96% of their free cash flow on share buyback over the past decade, money that could have been saved to build a rainy-day fund. These same companies are now the prime targets for government bailouts.

Buybacks are not new. What is new is the sheer magnitude of the buybacks (and leveraged buybacks) at the same time insider selling was hitting records.

Insiders got rich in the short run at the expense of the long-term health of the companies they ran.

The financial engineering that we have seen over the past decade is coming to an end. How quickly, we don’t know. But we do know that the environment is changing.